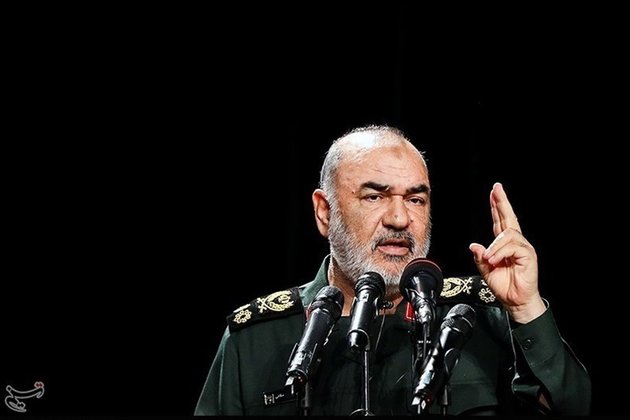 TEHRAN (Tasnim) - Commander of the Islamic Revolution Guards Corps Major General Hossein Salami highlighted the failure of the US' plans in Afghanistan, Iraq, Lebanon and Syria, saying the enemies of Iran are plainly withdrawing from the region.

"We are witnessing the obvious retreat of the enemies and the big powers from the region," the IRGC general told reporters in Iran's southern city of Kerman on Tuesday.

Pointing to the "US' escape from Afghanistan" and the pullout of American forces from Iraq, the commander said the US plots against Lebanon and Syria have also ended in failure.

"We are witnessing the defeat of the enemy's objectives and moves in the sanctions against Iran," he noted, adding that the enemy's plan to impose political and economic blockade on the Islamic Republic has ended in failure as well.

Major General Salami went on to say that the signs of self-confidence and victory in the front of Islam and resistance have become clearly evident.

In comments last month, the senior commander said the enemies of Iran are facing a lose-lose situation with a sense of "strategic frustration".

In remarks in July 2020, Leader of the Islamic Revolution Ayatollah Seyed Ali Khamenei highlighted Iran's power to overcome economic problems, saying even the enemies admit that the sanctions and pressures against Iran have ended in failure.